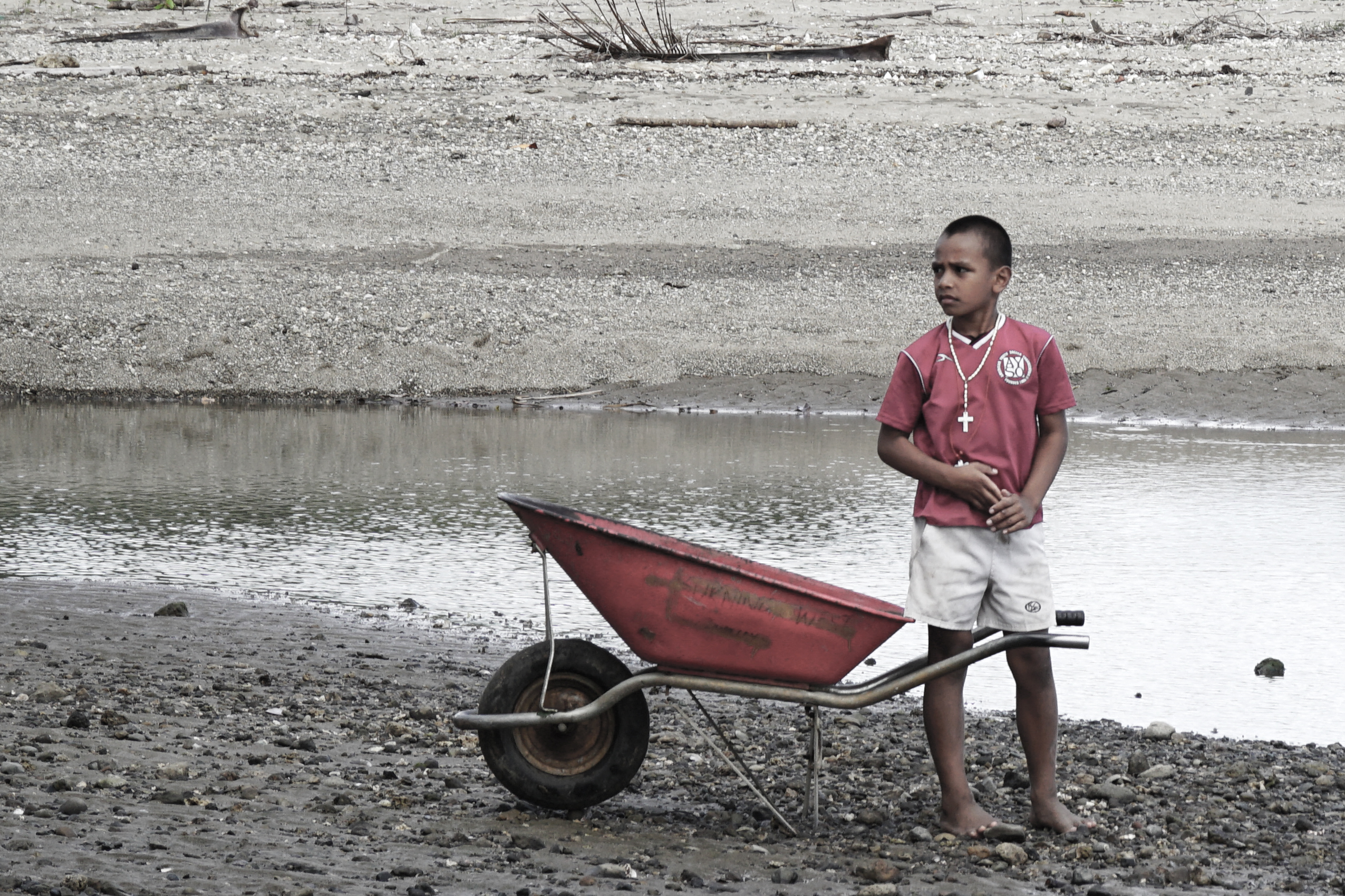 The islands in the South Pacific are drowning, coastal villages have to move inland. Samuela Kuridrani did not want to accept this fate: The 25 year old founded Fiji’s first community nonprofit organization “Kai Ni Cola”. Now, the whole village battles the effects of climate change.

The beach in front of the village Namatakula on Fiji’s main island Viti Levu is full of people: children playing tag with black garbage bags, teenagers collecting plastic from the ground, and another group is planting mangrove bushes in the fine-grained, beige sand. Only one person seems to stay calm in this chaos: tall, handsome and outstanding in his bright red tank top, Samuela Kuridrani retains the overview. Everyone came at his invitation. Specifically, at the invitation of Fiji’s first community nonprofit organization “Kai Ni Cola” (Tree of Life), that the 25-year-old initiated in September 2017.

“I never thought climate change would reach my village so fast,” Samu tells me and his dark eyes sparkle, “when I went to study in Australia, everything was good. Within just three years, the storms have increased and the beach has eroded by three meters. The spot where I played as a kid has disappeared. When I saw the massive changes, I knew something was going wrong.”After unsuccessful fishing trips, conversations with his cousin, a marine biologist, and his own research, he found the cause of the problems: climate change. Samu, who studied Occupational health and safety, wanted to act. “We can not wait for our government,” he said to his peers in the village, “it’s about our history, our culture, our homeland. We have to do something!” With a starting fund of 500 Fiji dollars, he and some youngsters planted palm trees to stabilize the beach. Within a few weeks though, the tide had torn out the roots of the young plants. It was the wake-up call Namatakula needed: The village founded the non-profit organization Kai Ni Cola. “We took the name from a women’s group,” explains Samu, “we plant trees to protect our home. We bring to life everything that we are losing. “

Corals and mangroves – Kai Ni Cola’s re-animation initially focuses on these two areas to prevent further sea-level rise. “We wanted to start with something that we could do cheaply and without much know-how,” says Samu, who represented Fiji´s youth at COP23 in Germany in 2017. It was not as easy as assumed: Of the 400 mangroves, only 200 small plants survived the bad weather; and of the 300 corals 60 percent collapsed. “It was a test run”, the Fijian stays positive, “we just have to find a better spot for the coral.” His unbeatable optimism pays off. So far, Kai Ni Cola has largely relied on donations from villagers whose sons are earning good money as rugby players in Australia. Recently,  government support has came in too. Although the 10,000 Fiji dollars of the “Ministry of Health” were primarily for tuberculosis workshops, part of the money was dedicated to the adaptations as well. “First we want to bring the mangrove forests and coral gardens to a good level, then we can coordinate further projects.”

“The beach is already about 20 centimeters higher,” Samu proudly indicates. This is due to the fact that in March of 2018 the village community deepened and redirected the bed of the Nausee River that flows from the highlands through Namatakula into the sea. The goal of the action was to prevent future flooding and curb erosion. A second reason for the improved condition of the beach are the mangroves, Samu is convinced. “At least every three months, we try to do something,” he explains. This ensures that everyone in the community is behind the actions and takes responsibility. “Not what Samu says is done”, emphasizes the 25-year-old, who started a new job in Nadi and slowly hands over his operational tasks to one cousin in the village, “instead, we decide everything in the community.” This process is in line with centuries-old indigenous traditions. “It’s important to know who you are and where you stand”, explains the young NGO-founder. According to Samu, it is something western NGOs are often struggling with in their work on the Pacific Islands: “They do not sit down with us and ask for advice, they simply order and transpose things over our heads.” His approach was different. “The mentality and indigenous values ​​are an essential part of our organization,” says Samu, “I follow the protocols.”

The example of Namatakula is already motivating and inspiring other communities. “Some villages in the area are approaching us,” Samu says, “while we do not have the resources to expand our actions, we can encourage others to get involved and work together.” Instead of being anxious of an uncertain future, the inhabitants of Namatakula are now confident. They feel they have their destiny in their hands. “That’s all in God’s plan,” Samu is convinced, “If there’s something to do and you do not find anyone who wants to do it, then it’s probably your job to go about it.” The people of Namatakula are fortunate that Samu received this call with open ears.